Under Sl.No. 48 of List II (Provincial Legislative List) of the Seventh Schedule to the Government of India Act, 1935, read with section 100(3) thereof, the powers to levy and collect "Taxes on the sale of goods and on advertisement" was a Provincial subject. The said 1935-Act applied to Pakistan in terms of section 8 of the Indian Independence Act, 1947. In 1948, sales tax was made a federal levy and the Pakistan General Sales Tax Act, 1948, was enacted which came into effect on April 01, 1948. Later, the said 1948-Act, was superseded by the Sales Tax Act, 1951 (Act No. III of 1951). Initially, sales tax was levied only on sale and consumption of goods. However, through the Taxation of Goods (Sales & Purchases) Order, 1960, the scope of sales tax under the 1951-Act was extended to include sale, importation, exportation, production, manufacture or consumption of goods. In 1990, the Sales Tax Act, 1990, replaced the 1951-Act and introduced VAT-type sales taxation on goods. Sales Tax on services was never a subject of the Federal Legislative List. Being a matter not included in the Federal Legislative List or the Concurrent Legislative List in the Constitution, the matters relating to levy and collection of sales tax on services remained in the Provincial domain. This position was further clarified and re-asserted by the 5th Constitutional Amendment of 1976 and the 18th Constitutional Amendment of 2010 (in relation to item No.49 of Part A of the Fourth Schedule to the 1973-Constitution of Islamic Republic of Pakistan). Sales Tax Ordinances of 2000 (including the Sindh Sales Tax Ordinance, 2000), were promulgated by the Provinces and these came into effect from July 01, 2000, and the Central Excise Duty (now FED) on such provincially-taxed services were simultaneously withdrawn. However the Provincial Sales Tax on Services continued to be administrated and collected by Federal Board of Revenue (FBR) under the said 2000-Ordinanances. Later, in terms of Articles 8 and 9(2) of the 7th NFC Award of 2010, the Sindh Sales Tax on Services Act, 2011, was enacted by the Sindh Government and, effective from July 01, 2011, the Sindh sales tax (SST) is administered regulated and collected by Sindh Revenue Board (SRB). FBR issued a Press Release on the same day i.e July 01, 2011, on the FATE page of its website stating that: "The Services rendered by registered persons who were previously subject to Federal Excise Duty (being collected in Sales Tax mode) have now been subject to Sales Tax by the Provinces through their legislation with effect from 1st July, 2011. The Federal Board of Revenue through a notification has withdrawn Federal Excise Duty on such services (Table-II of First Schedule to the Federal Excise Act, 2005) with effect from the same date i.e 1st July, 2011 in order to avoid double taxation.". .

The taxable Services are described in section 3 of the Sindh Sales Tax on Services Act, 2011, and are listed in the Second Schedule to the said Act (NB. See link "IInd Schedule"). While telecommunication services are liable to tax at 19.5%, other services are liable to tax at the standard rate of 16%. However, in certain cases, the tax is levied at reduced/ concessionary rates the details of which are available in notification No.SRB-3-4/8/2013 dated July 01, 2013, issued under section 8(2) of the Act. The taxable services which are otherwise exempt from tax subject to certain limitations, conditions and restrictions are specified in notificationNo.SRB-3-4/7/2013 dated June 18, 2013, issued under section 10 of the Act

COLLECTION OF SALES TAX ON SERVICES:

For the year 2010-11, when Sindh sales tax on services was collected by FBR at the standard rate of 17%, the FBR collected and transferred an amount of Rs. 18.28 billion to the Sindh exchequer. For the year 2011-12, SRB was assigned the functions of administration, levy and collection of sales tax under the Sindh Sales Tax on Services Act, 2011, which reduced the standard rate of tax from 17% to 16%. The Government assigned a revenue target of 25 billion for the year 2011-12 which represented an increase of (+) 36.76% over the FBR's collection and transfer of 18.28 billion during 2010-11. This target of Rs. 25 billion was not only achieved by the SRB but was marginally exceeded too. For the year 2012-13, the Government assigned a target of Rs.32 billion which represented an increase of (+) 28% over the collection Rs 25 billion of a last year, without any increase in tax base or tax rate. Alhamdolillah, the SRB exceeded this target by Rs.1.698 billion and was able to collect tax of Rs.33.698 billion during 2012-13 which represents an increase of (+) 34.26% over the collection figures of Rs.25 billion for the last year. For 2013-14, the Government has assigned revenue target of Rs.42 billion which represents an increase of (+) 31.25% over the last years target of Rs 32 billion. The aforesaid performance of SRB is attributable to various factors including (1) a perfect online system of registration, tax payment and return filing ; (2) coordination, and cooperation with taxpayers; (3) taxpayers' education and taxpayers' facilitation; (4) trust and confidence of taxpayers in SRB system; and (5) relentless efforts, monitoring and surveillance of SRB officers and staff. 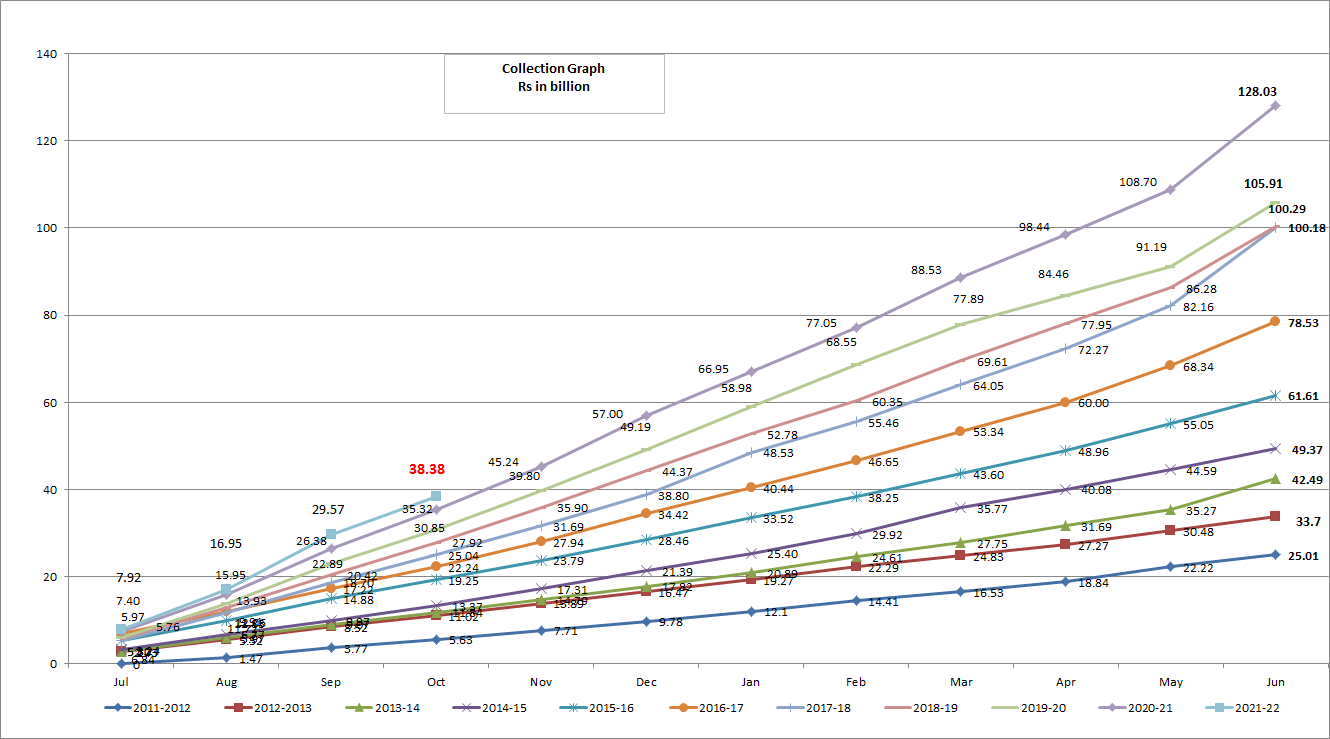 In view of above, in order to avoid any problem, all persons registered with SRB are requested to continue filing their Sindh sales tax returns in the form SST-03 on SRB portal i.e. http://e.srb.gos.pk in accordance with the provisions of the Sindh Sales Tax on Services Act, 2011, and the rules made thereunder.

SRB shall advise SRB-registered persons when Single National Sales tax Return is fully developed by FBR / PRAL in consultation with the provinces and after proper user acceptance tests are carried out.

Any departure from above advice may entail contravention proceedings by officers of SRB for non-filing of the prescribed return with SRB, which may lead to imposition of penalty and other related consequences.

Thanks for your co-operation.